Your Cart is Empty

Intratec Chemical Process Library is the first free online encyclopedia of chemical process technologies. Our Library covers not only processes description themselves, but also the economics surrounding chemicals production, providing real-world knowledge on the production of several chemical commodities. Click here to check all chemicals covered.

In this page you will find free data about Maleic Anhydride, including:

Maleic anhydride (MAN) is a multifunctional chemical intermediate with applications in several fields of the chemical process industries (CPI). Its major end use is as feedstock in the production of unsaturated polyester resins (UPR). In addition, maleic anhydride can be used as a raw material in the production of 1,4-butanediol (BDO), gamma-butyrolactone (GBL) and tetrahydrofuran (THF). BDO has been one of the world’s fastest growing chemicals in recent years.

The following paragraphs, along with the simplified flowsheet above, describe a process for producing MAN from n-butane. The process described is a fixed-bed technology similar to the one owned by Huntsman Corp. (Danbury, Conn.; www.huntsman.com).

Fresh butane is vaporized and mixed with air before being fed to the reactor. The oxidation reactor consists of a fixed-bed, multi-tubular reactor containing a vanadium phosphorus-oxide catalyst supported on silica.

The heat generated in the highly exothermic reaction is removed by a molten salt circulated through the jacket that surrounds the reactor tubes. The molten salt is then passed through an external cooler and cooled by boiler feedwater, producing steam.

The reactor exit-gas stream is mainly comprised of maleic anhydride, water vapor, carbon oxides, oxygen, nitrogen and unconverted butane. This stream is then partially condensed. The condensate stream is sent to the purification area, while the gas stream is sent to an absorber column for recovery of the remaining MAN.

MAN that was not condensed is recovered by absorption with a solvent. The residual gas (containing mainly nitrogen, CO, CO2 and unreacted butane) is ...

The purification area consists of ... 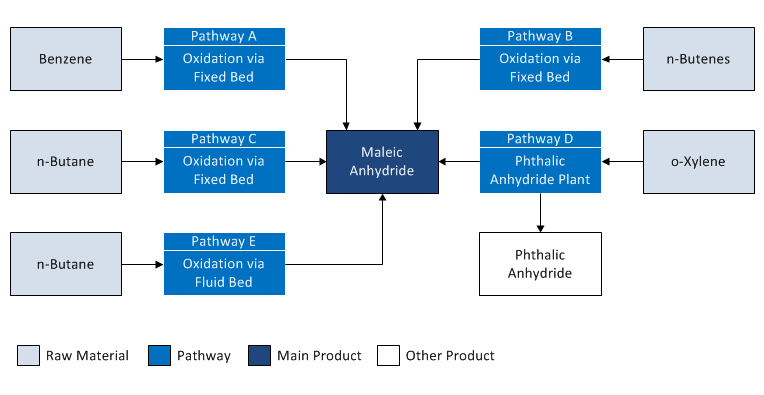